Last weekend saw the ninth running of the Trail Verbier St Bernard, the big trail running event of the year here in Verbier. The event comprises several different courses suited to different levels of ‘madness’, from the X-Direct 6km sprint, with 670m of vertical, to the mammoth X-Alpine 111km run with 8,400m of vertical climb.

This year, I entered the X-Alpine relay with Jonas Sunstedt, co-founder of Haute Velo, while fellow director of Bramble Ski, Colin, entered in a team with his sister Sarah.

The team event covers the full distance of the X-Alpine in two legs. See below for our Trail Verbier St Bernard joint race report:

At 4 am we set off from Place Centrale in Verbier. As the tunes of Bruce Springsteen’s ‘Born to Run’ disappeared behind us giving way to the sounds of footsteps, panting, and the odd fart. The street lights vanished, tarmac turned to dirt, and our path was lit by shaking head lights and a steady full moon. In the warm clear night, the first descent was so dusty that you couldn’t see the feet of the runner in front of you.

As we started climbing the mighty Catogne, so did the sun, beating down on already sweaty runners. The view from the top filled me with a strange mix of joy, expectation, and fear as I looked down on Champex Lac and further up the Val d’Apette and the Mont Blanc massive. The descent to Champex Lac is quite technical but definitely one of the highlights of my race, and I managed to stay on my feet and put them where I wanted them – definitely a positive when running in a “no fall” area!  It was amazing to see my family and my team mate at the food station and as I set off I felt rejuvenated until I came into the forest where it dawned on me that I was not even half way.

View from Le Catogne over Breya and the Trient glacier.

As I was going up towards Col de Breya, it was a comfort to see that I was not the only one struggling. People were scattered everywhere, sitting on roots and fallen trees in the forest, having a bar and a word with themselves, or lying on rocks higher up in search of shade from the relentlessly scorching sun. At the pass, we were welcomed by a lovely cooling breeze from the Trient glacier. During the ascent to Cabane Orny’s food station, I was pretty much on autopilot, and the refreshing strawberry cordial couldn’t come soon enough.

What goes up must come down and in this case, oh boy, did it go down! Some 1,500 vertical metres in steep, rocky terrain in the midday sun took its toll on feet, knees, and back. The forest offered some shade from the sun but also managed to camouflage roots and rocks that I attacked at high speed with one foot, resulting in only a little lost skin thanks to a gracious tuck and roll in front of some very supportive and caring spectators. With just 8 km to go, I once again saw my amazing support team and my spirits were lifted putting me into cruise mode for the remainder of my leg to La Fouly, where the changeover took place.

Taking over from Jonas in La Fouly, chanting the mantra of ‘slow and easy’ – I tend to get caught up in the energy of these events and often pay the price – the dirt road winds slowly up the beautiful Val Ferret then becomes a stony path up to Lac des Fenêtre and the Fenêtre Pass that leads into Italy. Surrounded by runners who had already completed more than 50 kilometres, there was no chance that I’d get caught up in the unnecessary hype and my mantra was easily obeyed.

Crossing on foot into another country provided some thrill and the few kilometres back to the Col du Grand St. Bernard passed quickly, aided by the stirring rhythm of drums echoing in the mountains which I assumed came from the supporters at the pass. I jogged into the St. Bernard pass station to the support of my waiting family, re-fuelled, and began the short ascent to Col des Chevaux. This section of the race was beautiful. The rocky cree slope descended quickly into a high alpine meadow dissected by a stream, and then steadily down further past the Lac des Toules and the forest before the next checkpoint at Bourg St. Pierre where I was welcomed by Jonas and my family. I was 30km in, about halfway through my leg, and on a complete high.

The trail up Val Ferret.

The view up Val Ferret towards Tête de Ferret.

From Bourg St. Pierre it was a long and steady climb up towards Col de Mille. Boring, humid, and bug-infested at first, the dirt road weaved back and forth to above tree level. From here, we picked up a path that traversed across the lower south-facing slopes of the Petit Combin. I had heard mention several times before how this section can drag on, and this is no lie. Here, where the path clings to the side of a massive rock face and tracks along and over ridges and ancients folds on a steady trajectory upwards, you get a sense of just how minuscule we are in this grand and awe-inspiring landscape. With the sun setting over the Mont Blanc massif to the west, there was much to feast my soul on. As dusk settled, so the most surreal part of the race unveiled itself. Up until now, there had been vast stretches where I’d felt quite alone. I knew there were hundreds of people out in the mountains, but tiny figures were hard to spot in this grand landscape. However, as darkness prevailed, a long line of headlamps turned on, tracing the course we had covered and the road ahead. Bizarrely, with darkness, I no longer felt so alone.

Col de Mille was a quick refreshment stop as I was keen to get on with the final stages of the race. From here you can see Verbier, the end was in sight and I was pumped! I rallied with four other runners, passing several others on the descent to Lourtier, our stomping feet drumming up the dry earth so that I felt I was running in a cloud of dust. Despite this, it was a fantastic trance-like descent. By the time I reached Lourtier, it was midnight and I was feeling shattered. Here my wife met me again, fed me supplies, and kept me company while I procrastinated for 45 minutes (oblivious to the fact that she would probably have loved a normal support stop so that she could go home to bed – sorry Maev) before reluctantly heading out for the final uphill assault to La Chaux.

For much of the time, the only support came from cows grazing their mountain pastures. 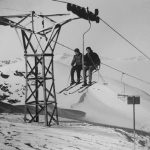 Sunset over the Mt Blanc massif.

This short 5km section of the race is brutally steep and I felt like a mere mortal passing the heroic figures who had started in Verbier some 100kms before this. Finally, the steep switchbacks emerged above tree level and I could see the lights of the La Chaux drinks station… I was almost there. But this last leg dragged on and it was the most emotionally trying part of the course. At La Chaux, I indulged in 15 minutes of shut-eye followed by a rather revolting mix of fluids and dry bits to top-up the energy levels for the final 5km leg into Verbier.

After 14 hrs and 22 minutes out in the mountains, I finally crossed the finish line in Verbier, my mantra of slow and steady still ringing true in my weary head.

The organisers of the race did a fantastic job and, together with all the supporters, cannot be applauded enough for making the VSB a truly fantastic event. I am so impressed with all of the runners who took part and am inspired for the next chapter in our Trail Verbier St Bernard adventure … the next level of madness: The Swiss Peaks. Bring it on Duncs and Col.

Like all of the season’s trail runs, there was a kids race that was well attended by the Bramble youth. It seems the bug has bitten the next generation!

Acacia on the move

Tristan and Finn dashing to the finish line.

Mum and son: Sarah and Baker

Mum and daughter: Maev and Acacia